In my youth like many youngsters Arthur C Clarke’s mysterious world programme captivated me, stories of Big Foot, Yeti and of course the Loch Ness monster, truly fascinating. Little did I know then that I would be so heavily involved in such a sensational story myself, or the fact I would spend sleepless nights contemplating the bold move in publishing photos of England’s own Nessie. Publishing such controversial photos being a full time professional photographer living on the edge of Lake Windermere weighted heavily on my mind and my career. Like most of the population of adults today I too was sceptical of the unknown, great for after dinner discussions and a giggle whilst reading tabloid newspapers that is until you have witnessed something with your own eyes.
February the 5th 2007 changed my views forever, having dropped the kids off at school my wife and I decided to take a walk up to the summit of Gummers Howe situated south of Lake Windermere. The summit offers the best vantage point overlooking the lake with views stretching miles, my purpose that morning was to photograph jet planes skimming the fells at eye level. Armed with professional cameras and binoculars and of course a thermos flask we climbed to the top, the summit offered clear blues skies with a little mist towards Newby Bridge and a mirror finish to the lake.
After several shots of the distant mist hanging in the tree’s we waited patiently for planes to come into view, observing the Lake to pass the time. I cannot remember who first saw the strange shape cutting a distinctive path across the lake but it was jaw dropping to state the obvious.  Virtually opposite to the caravan site Hill of Oaks measured at three kilometres from the summit of Gummers Howe swam this large dark shape diving then resurfacing in a slightly different point. Of course I took a few photographs checked the view finder but with only a 300 mm lens to hand and being hand held all that was showing was a dark dot in the horizon.  With binoculars the image was clearer and more defined but it still left us both wondering what it could be, your rational mind tries to suggest it’s , a tree, Deer, wild fowl  but it’s shape, size and movement suggested not. After 15 minutes of this event the anomaly disappeared but left quite a lasting impression on us both. I took the images back to the studio and loaded them onto my computer where the little dark dot was more vivid once on a desktop screen the big question now was what next.
As the photographs were taken on a professional Canon camera and shot in camera Raw format as appose to Jpeg it would be easy to get the images validated so I sent them off to Canon UK. A letter came back supporting the validation and future equipment support, next was a forensic report to uncover other information like size and location. Mark Carr an independent forensic photographer spent three days analysing the memory card and was ultimately satisfied that I had genuine images.
Here are a few extracts from his report,
ON a number of the images (particularly 48) there was a darker patch of pixels contained in the anomaly. It was not possible to resolve this any further (in part due to camera shake and in part due to the distance the anomaly was away from the camera). This effect could be due to their being a solid object. I would estimate this darker patch to be as much as 4m in length on shot 48.
In conclusion, based on the information I have been given and the checks I have so far been able to carry out I am satisfied of the following:
I then contact Ian Winfield a leading ecologist from the Freshwater Biological centre on Lake Windermere to get his opinion,
On the basis of my 27 years experience as a professional freshwater fish ecologist, including leading research programmes on Windermere for the last 17 years. This size estimate means that I cannot explain the photographs by reference to any fish or other vertebrate previously demonstrated to inhabit Windermere.
Another professional specialised I contacted was
Fixerlabs technical director to take a look at the files, Fixerlabs have countless years dealing with images for the US Navy, EU commissions and UK DOD. The letter came back stating that they were genuine and matched my description.
The next step was to release the images to the National press.
All images copyrighted to Linden Adams Photography, Bownessie is also subject to copyright and Trademark 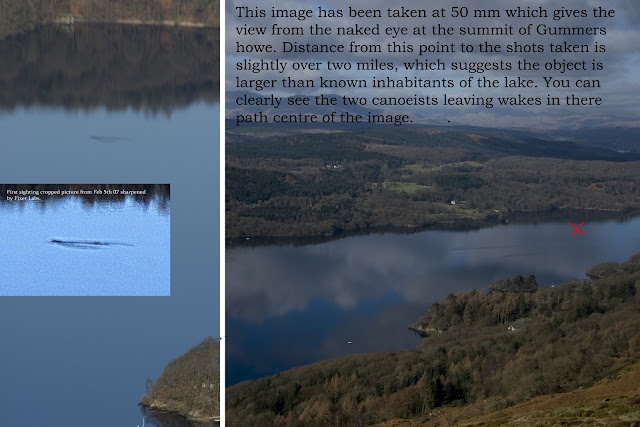 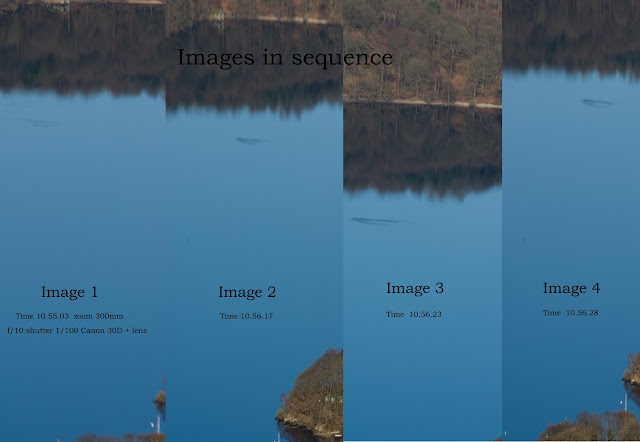 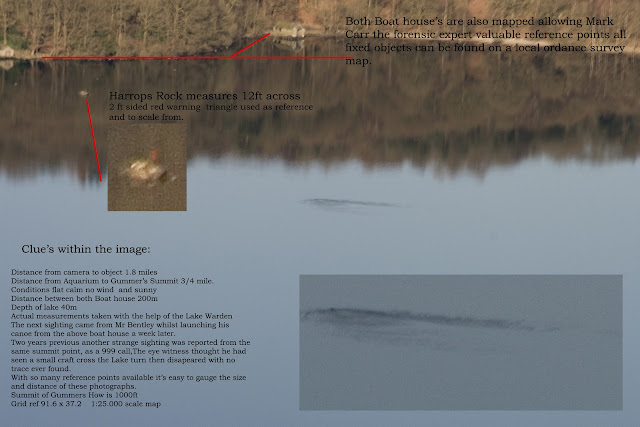 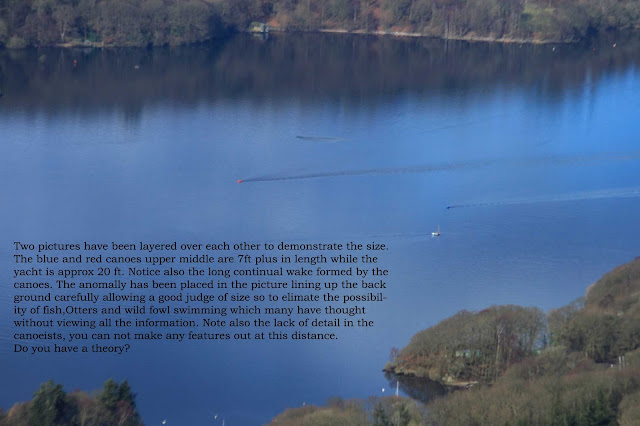 With news today of another close encounter perhaps a real search of scientific value will happen on Lake Windermere this time.
.http://www.thewestmorlandgazette.co.uk/news/8858988.Is_this_Windermere_s_mysterious_Bownessie_monster_/ 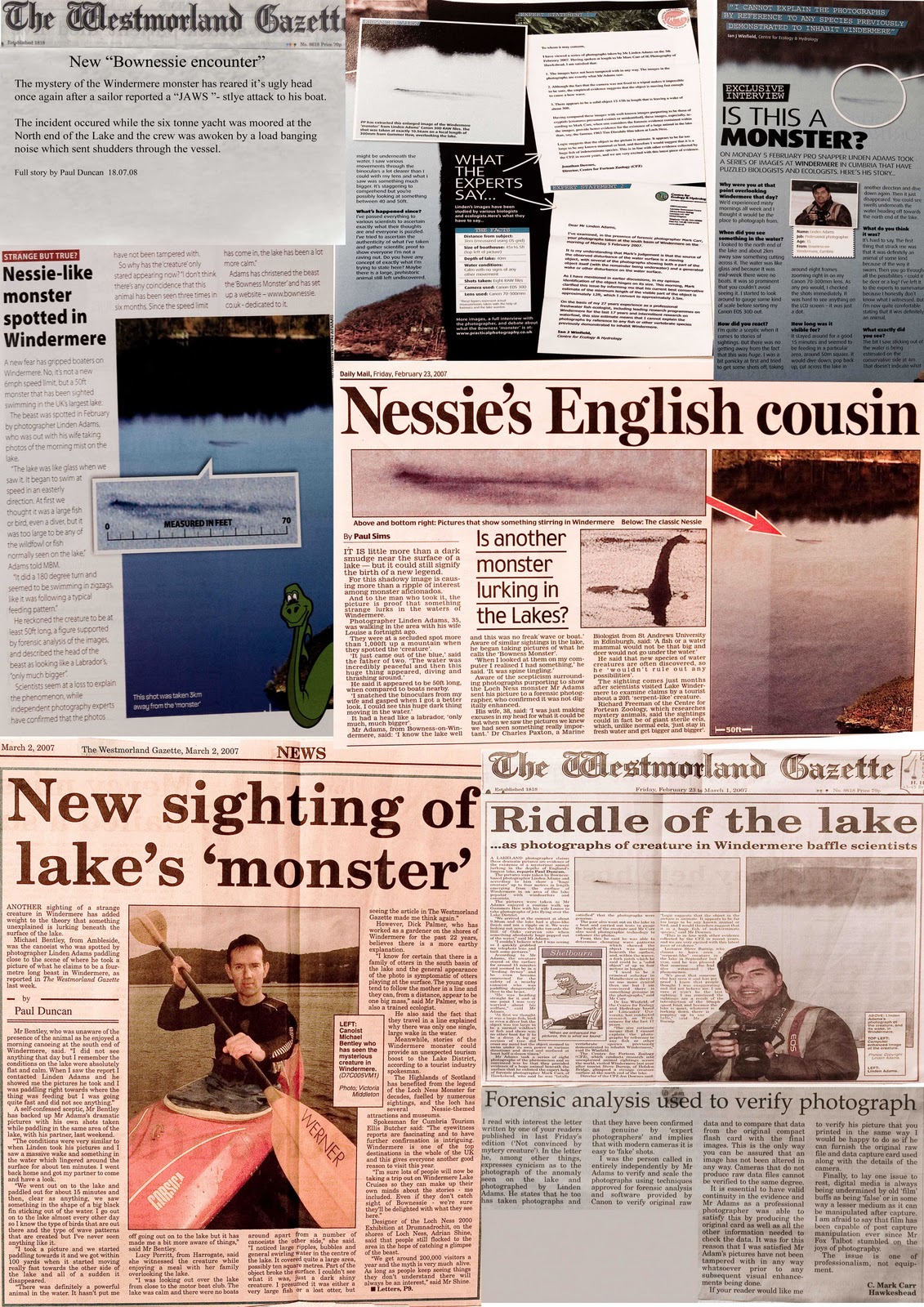 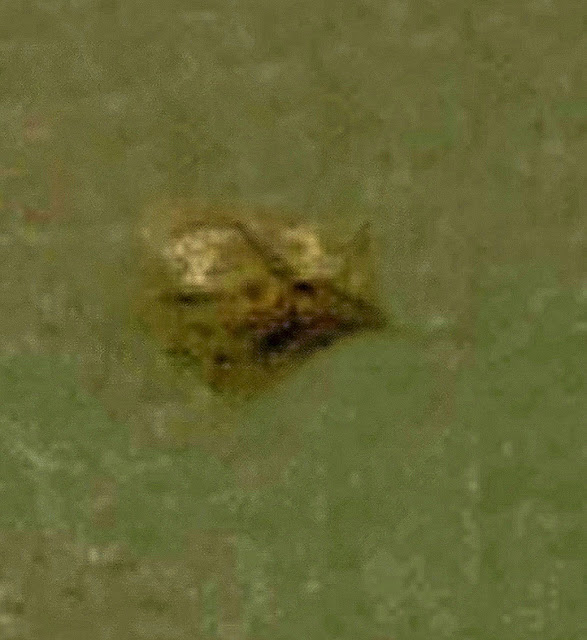 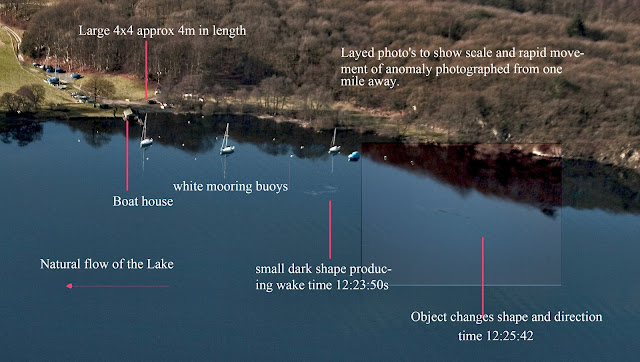 Linden
Award winning photographer based in Cheshire covering the UK